Nine West’s new ad campaign has been getting a lot of press since it debuted, so I thought I would chime in with my own opinion on the subject, given my view is considerably different from most of the opinions I’ve been reading on the subject.  I have read several articles and tweets that claim the ads are all kinds of negative things, but in all honesty, from a marketing point of view, I think they are pretty awesome.

What’s all the fuss about?

What exactly are these controversial ads that I am referring to?  Take a peek at www.NineWest.com to see for yourself.  The first one I’ll mention is the “Husband Hunting” ad.  Nine West is advertising its shoes as the perfect accessory in which to go out and look for Mr. Right, and quite frankly I do not understand why women are taking so much offense to this idea.  Critics claim the ad is very 1950s and outdated—that women today need shoes for things like getting a raise, not finding a husband.  Reality check, I am a 30-year old woman and all of my single friends are in fact looking for life partners.  Every one. 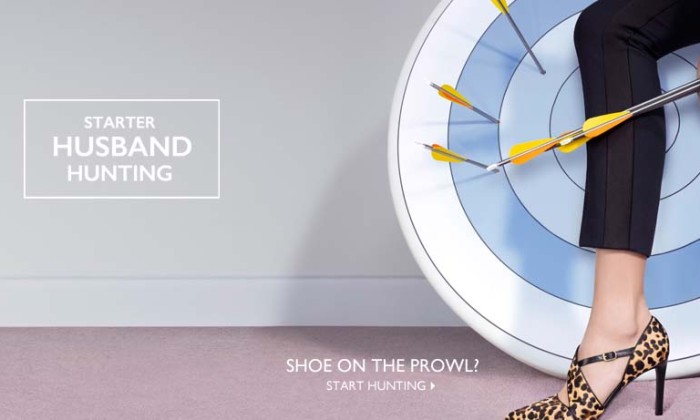 A lot of single people go out on the weekend nights hoping to meet potentially datable people whom they could someday marry.  Nine West is just letting these single ladies know that their shoes are attention getters and perfect for attracting one’s soul mate.  I don’t see the harm in this message, so maybe I am the type of person Nine West is targeting.  The ad worked, considering that I went to the website after reading about these ads when normally I do not even consider Nine West when making a shoe purchase.  I haven’t purchased yet, but Nine West is now on my radar.

Another controversial ad in this campaign is a picture of a woman carrying a bag with some flip flops sticking out the top that reads “Anticipatory Walk of Shame”.  This one has the internet all kinds of riled up as well but when I polled my female friends, in a very scientific study, I got a 0% offended rate.  I sent a message to my friends with a screenshot of the ad and asked them how the ad made them feel.  Not a single one of them said offended, angry, upset, et cetera.  Some of the responses I received included: “LOL”, “Shouldn’t she be wearing the flops if this is a walk of shame?”, and my favorite, “Yes!  Love this! I go out hoping my night will end in a walk of shame.”

So, perhaps my friends are some rare females stuck in the past by hoping to one day be married with children  (AND successful careers) or maybe my friends are standard modern-day women, who enjoy going out for a night on the town and come complete with a sense of humor. Is this A Marketing Triumph?

Who knows yet, the ads were just released a few weeks ago and will supposedly be featured in September issues of magazines.  Nine West has definitely received a lot of press though, and while a lot of it is negative attention, it’s attention none-the-less.  The negativity seen on Twitter is what drew me to look at the ads for myself, and then I started browsing the website and noticing that, hey, Nine West has some cute shoes!  If the negative publicity got me looking, I can only assume it got other women looking as well, and perhaps some of those women purchased a pair of leopard booties to help her snag the man of their dreams!  I find the ads amusing and not in any way offensive.  I wish Nine West success in this campaign!

Mary DeBoni is a Senior Pricing Analyst at Wiglaf Pricing. Before coming to Wiglaf Pricing, Mary spent her post-graduate-school years working as a data analyst and as an adjunct instructor of Economics and Statistics at Moraine Valley Community College and Richard J. Daley College. Mary is a member of the Professional Pricing Society. She holds a BA in Economics from Michigan State University and an MA in Economics from The University of Detroit Mercy.